Nippon Medical School is the oldest private medical school in Japan with a history of more than 130 years. In 1896, during the Meiji Era, Nippon Medical School’s founder Tai Hasegawa established ‘Saisei-Gakusha’, a private medical school and a predecessor of Nippon Medical School. Tai Hasegawa founded ‘Saisei-Gakusha’ in order to pursue his two founding spirits, ‘Saisei-Kyumin’, meaning ‘to save people widely’, and ‘Kokki-Junko’, meaning ‘to discard oneself to serve for public’. Through the changing times, these founding spirits remain as our core philosophy. More than 10,000 graduates and students who will lead tomorrow’s health care have inherited the philosophy of ‘Saisei-Gakusha’.

1904・Nippon Igakukou
Nippon Igakukou is founded. This private medical school accepts a number of students from Saisei-gakusha, which was closed in 1903.

1918・Core spirit
The School's motto is adopted: "Selfless devotion to patients and society".

1986・The East Wing
A new building, the East Wing, opens at Nippon Medical School Hospital in commemoration of the 80th anniversary of foundation. 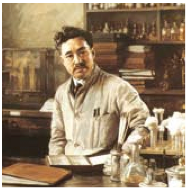 Hideyo Noguchi, a renowned microbiologist who devoted his life to the development of science, was a graduate of Nippon Medical School. In 1897, he graduated from Saisei Gakusha, a medical practitioner training school and the predecessor of Nippon Medical School. After the graduation, he became a researcher at the Rockefeller Institute. With his research on yellow fever, syphilis and many other diseases, he became a world-famous microbiologist. His devotion to science made him a Nobel Prize candidate on multiple occasions.
Provided by the Hideyo Noguchi Memorial Association